How much does the Sirui 75mm T2.9 1.6x Full-Frame Anamorphic Lens Cost?

Anyone who has marveled at epic Hollywood blockbusters – shot in glorious ultra-widescreen with that wonderful oval bokeh and vivid long blue lens flares – has seen what the best anamorphic lenses can do. Most big-budget movies rely on them, because of their striking visual aesthetic, but anamorphic lenses are increasingly finding uses in independent films too.
While anamorphic lenses became popular in analogue filmmaking, as cinematographers explored the visual impact of the wider CinemaScope aspect ratio(opens in new tab), they have enjoyed a surge in popularity among digital filmmakers who want to use the best cine lenses(opens in new tab) available. No longer do you need an anamorphic projection lens to correct the squeezed image; now this can all done in post production.
It is surprising how often technology developed for one application finds a use in another, for which it then becomes ubiquitous. While filmmakers and videographers talk increasingly of the widescreen cinematic look that the best anamorphic lenses can provide, you make be surprised to know that anamorphic lens cylinders were first developed for tank periscopes during World War I to get a wider look outside.
Filmmakers are constantly looking for ways to improve the aesthetics of their film, using dedicated cine lenses, as well as color grading and aspect ratio manipulation in post production. One common practice is to convert a 16:9 camera image shot on a standard lens into a 2.4:1 cinematic aspect ratio via post-editing applications. Although this method achieves a cinematic look, it also degrades the footage and results in lower quality images.

Sirui Presents 75mm T2.9 1.6x Full-Frame Anamorphic Lens that is the best fit for your glorious shot. The price of this anamorphic lens is $1499.00 USD.
This price includes shipping and warranty. An All-Round Player
This lens, with a 1.6x squeeze factor, behaves like a 46mm horizontally while retaining the vertical FOV of a 75mm, suitable for capturing close ups and distant subjects. This lens enables the camera to see well to the left and right, leaving filmmakers more space for composition.

High Resolution Wide-Screen Images
Two aspect ratios are here for your choice. When shooting 3:2, this lens offers a 2.4:1 aspect ratio, whereas shooting 16:9 yields a significantly wider 2.8:1 aspect ratio. You'll have no problem getting super crisp wide-screen shots on this lens, with the subject being exceptionally sharp yet the background soft and natural.

Subtle Lens Flares
Point the lens at a light source to get a horizontal blue lens flare that the anamorphic lens is famous for. The subtle and natural blue streaks stand out for adding a Sci-Fi ambience to your shots without being too aggressive.

Creamy Oval Bokeh
Due to the 1.6x squeeze factor, light spots in the distance are vertically stretched into pleasing oval bokeh, providing a more dreamy and abstract background over regular lenses. Soft and creamy background blur further separates the subject, delivering a flattering cinematic look to your shots.

Sense of Compression
Distance is not a thing to worry about. When shooting with this lens, things in the distance seem to be zoomed in to form a close connection with the subject, offering a unique sense of compression.

Consistent Cine Lens Housing
75mm lens maintains the same solid build quality as its 50mm brother. It features a fully metal body, an 82mm filter thread and a 1/4"-20 threaded hole. Focus and aperture rings are geared with the same position as the 50mm for easy lens switching.

Want to have your ideas precisely conveyed to the audience? Want to have the subject and background presented more subtly? Then 50mm T2.9 plus 75mm T2.9 would be a great combination you don’t wanna miss.

Four Native Mounts
Given the rise in popularity of full-frame mirrorless cameras, this lens offers four native mounts, including RF, L, E, and Z mounts, compatible with most full frame mirrorless and cinema cameras on. 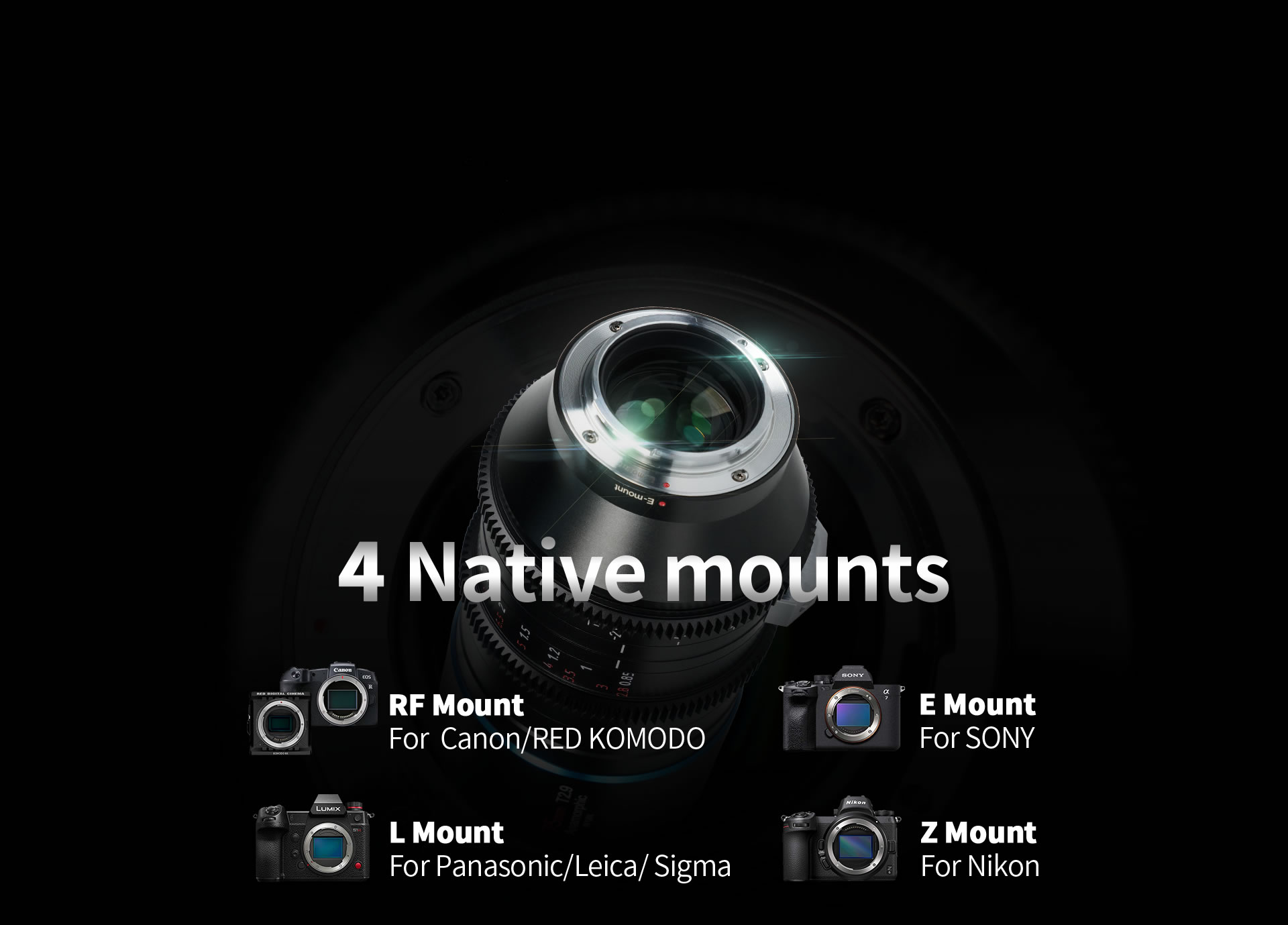