When it comes to filmmaking there’s no lens like the anamorphic lens. What began as a tool and technique for capturing and projecting wider aspect ratios, quickly became a Hollywood darling due to its unique characteristics.
Anyone who has marveled at epic Hollywood blockbusters – shot in glorious ultra-widescreen with that wonderful oval bokeh and vivid long blue lens flares – has seen what the best anamorphic lenses can do. Most big-budget movies rely on them, because of their striking visual aesthetic, but anamorphic lenses are increasingly finding uses in independent films too.

Sirui presents 50mm T2.9 1.6x Full-Frame Anamorphic Lens which creates a distinctive look that’s now a norm in cinema. It has 1.6x Squeeze Factor and
2.8:1 Wide-Screen Aspect Ratio. The price of this anamorphic lens is $1499.00 USD. This price includes shipping and warranty.

SIRUI Goes Full Frame
In the past few years, SIRUI 1.33x APS-C anamorphic lens lineup has disrupted the market with its competitive price and exceptional optical performance. Always looking to challenge itself as a professional lens manufacturer, SIRUI again blows the minds of videographers with its 50mm T2.9 1.6x full-frame anamorphic lens, which can be said to have no equal in its class.

Wider than Wider
This lens features a 1.6 times squeeze factor. When shoot in 3:2, it will yield a 2.4:1 aspect ratio. When the sensor is set at 16:9, you'll end up with a much wider 2.8:1 aspect ratio, the viewing experience delivered by it is as premium and immersive as the IMAX format.

Frame as You Like
Whether to shoot grand scenes or tight shots, the images you get with this lens will be of superior quality, high resolution and good sharpness. Being a full -frame lens means it can shoot wider than its APS-C equivalents, leaving you plenty of room for pan-and-scan or punching in the post. For example, if part of an image is redundant, just crop it out without worrying about pixel loss.

What You Get is What You See
As the third eye of shooters, 50mm focal length has an angle of view that is very close to human eyes. Featuring a 1.6 times squeeze factor, this 50mm lens can deliver a horizontal angle of view we’d expect from a 31mm regular lens and the super organic background blur, which help render your storytelling much more nuanced and engaging.

Beautiful Oval Bokeh
This lens, with a squeeze factor of 1.6 times, produces oval bokeh in a more pleasing shape than those lenses with 1.33 times squeeze, giving the footage extra expressiveness and aesthetics.

Vibrant Lens Flares
Pointing a light source directly into this lens to get that signature blue lens flares anamorphic lenses are known for, adding a sprinkle of magic to your image.

A Maximum Aperture of T2.9
When shooting wide open at T2.9 with the focus concentrating on the subject, you'll get a shallow depth of field image with the subject in focus and other areas out of focus. Using a wide aperture in low light conditions enables the camera to take in more light and achieves a faster shutter speed. Also, the aperture ring is engineered stepless to offer smooth iris control.

Cine Lens Housing
This lens looks super sleek as the whole barrel is built up of aluminum alloy. On top of that, the aperture and focus rings are both geared for a nice resistance and easy installation of follow-focus system. With a 1/4" screw hole at the bottom, the lens can be mounted directly on the quick release plate to maintain the balance of the whole setup. 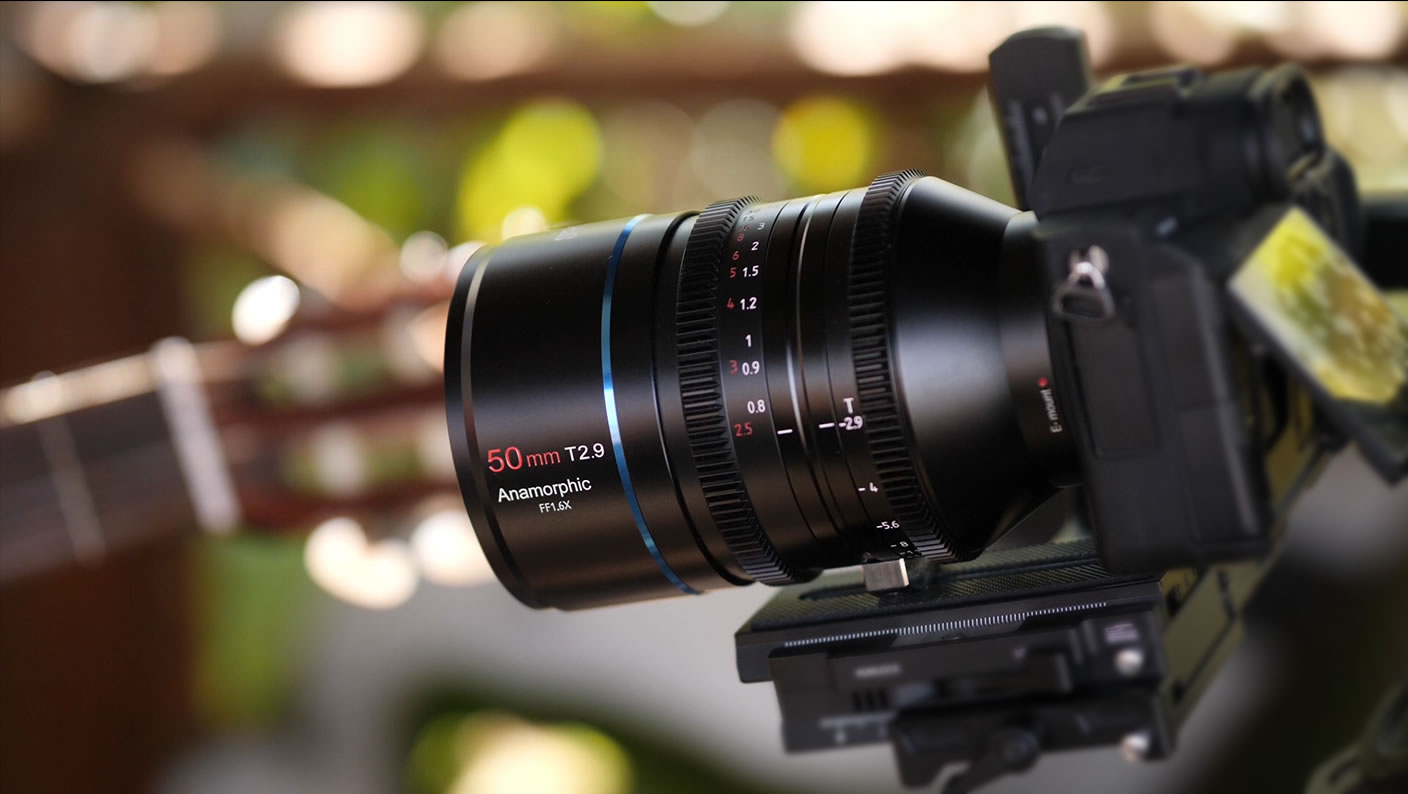 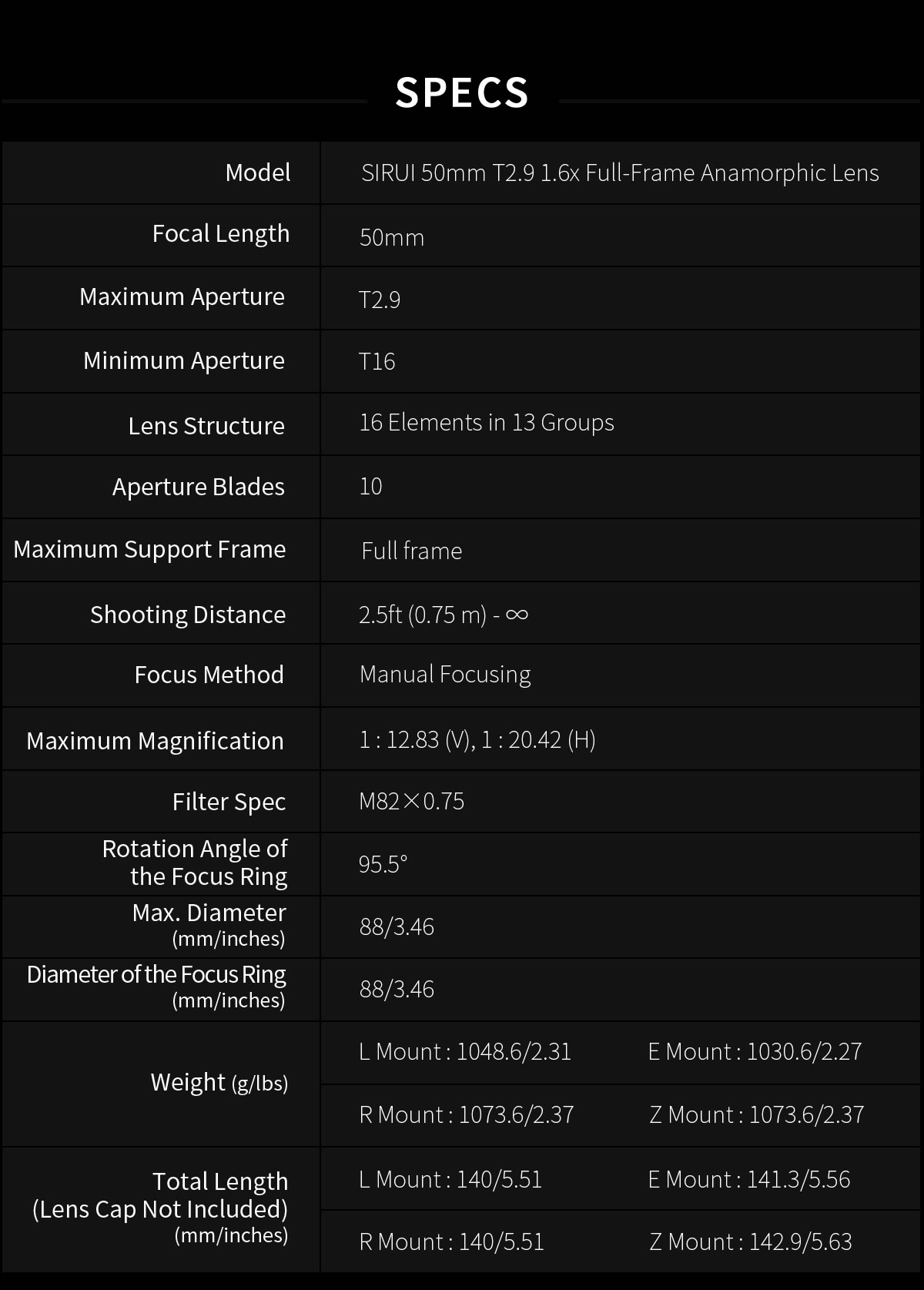 This is all for the  Sirui 50mm T2.9 1.6x Full-Frame Anamorphic Lens. Now, we will step back and give you some space to take your decision.